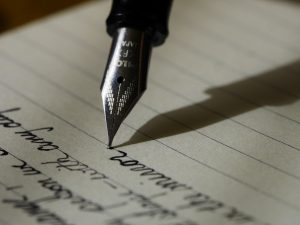 While a diary is a useful tool for recording everyday events and coming appointments, it doesn’t always form a record of an important period in someone’s life or of important events. Sometimes, a different form of notes is required and this is where an oral history journal can be helpful.

Oral (spoken) history was the first kind of history – stories, memories and knowledge passed on from one person to another by word of mouth. It’s how myths have been passed down through the centuries, as well as knowledge about herbs, sources of water in the dry seasons and apprentices have learned from their elders. Even today, there are story tellers who entertain groups with old stories and one of the first ways that children learn is through stories and information from their parents or carers.

Many families have their stories, passed down through the generations but these have not always been kept or recorded for others to find out what happened or how people lived at a different time or how certain events had an impact on whole generations or locales.

Oral histories can change in the telling, over the years until the original story may not be recognisable. By writing down these stories, they can be preserved for future generations to understand what it was like to live through certain events or at certain times and what it was like for a person alive at that time. For instance, my mother in law used to talk about going to school in the 1920s and how each pupil had to take a piece of coal with them to warm the schoolroom in winter, how she would take off her shoes and hide them on the way to school, going in barefoot, retrieving them on the way home and how the children would dig up a carrot from a field to have something to eat. These stories are not written down anywhere yet (though they will be). Children may not always be receptive to tales told by their grandparents, yet in later years would love to hear about those everyday tales, possibly when it is too late.


Oral history and the written down versions are primary sources for studying history, yet listening to stories told by older generations is a fascinating way of finding out how people lived a generation or so ago and does not feel like learning a lesson.

Stories from eyewitnesses are used today in court proceedings and have been used for thousands of years as the basis for recording events from wars, volcanic explosions and political upheavals, for instance. These days, oral history is often produced from interviews with individuals, recorded on video or audio media and then often transcribed to produce books. This can be done professionally by trained interviewers using the latest equipment and transcribers working from the tapes produced. It does not have to be so involved if you want to produce a family or group history that will form an interesting record for later generations. For instance, my mother tells of a time as a child when an earthquake shook her house, bouncing her about on the sofa and china rattling and books falling. This may be everyday stuff for some people, but she lived in an area where earthquakes had only been read about.

Until recently, children in local schools were asked to talk to elderly relatives about their memories of World War II. There are fewer and fewer people with these personal memories now but earlier recordings are still available for later generations to listen to or read. Ann Frank’s diary is her story of living hidden in an attic during the later years of World War II. It is not the spoken word but was written directly by her during her time in hiding. Books written about people’s ordinary lives at the time that events happened include information that may have been common at that time but which can be forgotten as time passes and circumstances change. For instance, a story written about life during world War II included such everyday items as what the family had for tea. One day, it was a slice of apple pie. That was it.

A diary of everyday events is not the same as an oral history, though it is also a primary source of information. An oral history taken from someone will include a lot of their background information, such as their date of birth, parents, full name and may include only information on certain events, like a war or natural disaster, whereas a diary often keeps information on everyday life in a chronological order, whether big events, small events or no significant events happen.

Taking an oral history is a way of carrying out historical research and there are professional interviewers who do this, however, it is also fun to carry out your own oral history project with older family members and who knows, you may also find out something interesting about your family as well as learning how life was different years ago?

It doesn’t have to be difficult or complicated. You may only need to ask the person to tell you about “when they were young” to start them talking. Recording the conversation is the best method of remembering everything that was said, however, transcribing even ten minutes of conversation can be a time consuming and difficult task, so it can be better to write notes down as you are listening. They may even be willing to write part of the information down for you and then you also have a record of their handwriting.

For younger people, writing the interview straight into a project book can be the best way to record and keep information they get. Older people may wish to take notes on paper and gather them together to create a composite note of memories that they can then write into the project book as a cohesive whole.