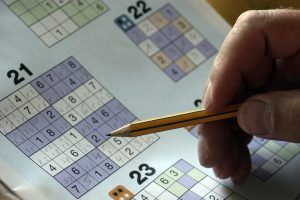 The terms given here are based on a 9 X 9 sudoku grid, though the game can also be played with a 4 X 4 grid, a 6 X 6 grid and even bigger grids. Some sizes of grids have different shapes.

That means that every row, every column and every block has 9 cells. There are 81 cells in total in a 9 X 9 Sudoku grid.

Boxes or blocks are shown with thicker lines to make them clearer.

This means that the given puzzle has only one correct solution.

A Sudoku puzzle is one that presents the player with a grid containing some numbers. There should be enough numbers (clues) included to ensure that the sudoku puzzle is a “proper sudoku”, that is, it has only one correct solution. The aim is to complete the grid so it includes all the symbols / numbers, following the 3 rules. So, only one of each symbol in any row, column or block.