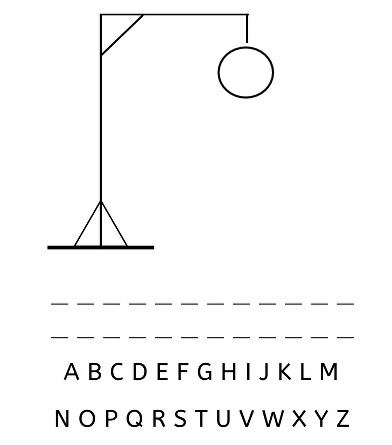 Hangman was originally a pencil and paper game, played by two people, using scrap paper. The objective is for one person to think of a word and the other person to work it out within a certain number of guesses. The number of letters in the word to be guessed are represented by dashes below the gallows (cross out the ones not used).

For experienced players, a phrase could also be used, with a forward slash line (/) between the end of one word and the start of the next. 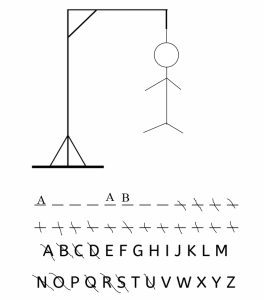 These days, of course, it can be played online, with a single player versus the computer or with distant friends. It can also be played with a physical board and wipe clean guess area. One such game is the Melissa and Doug version of Hangman. This is a good sturdy board, with all the alphabet letters available on the left hand side of the board. These are twisted once used, so you can be sure of which letters you have already chosen. The pieces of the hangman are also tiles on elastic. You start the game with these in the blank position and turn over one piece for each wrong guess. The game includes a pen and a wipe off area for guessing the word.

I have this toy, it was bought a number of years ago for one child and has since been passed onto younger cousins for their enjoyment. The toy has been well used and is still in great condition for the younger ones to enjoy too.

This version, like the original paper and pencil version is played with one guesser and one setter, however, some of the other versions, both apps and physical boards, allow for both players to be guessers and setters simultaneously and each one takes it in turn to guess the other’s word. There are also magnetic versions for playing while traveling.

To make it easier, a copy of the alphabet can be included in the game, so the guesser can mark off the letters they have already guessed.

The diagram shows a partially completed game of hangman. The guesser has had 10 guesses so far, as 10 letters of the alphabet have been crossed off. Two of the guesses were correct (A and B) and these have been added to the 8 letter spaces of the word to be guessed and eight lines have been added to the hangman drawing. The hanged man is nearly complete (depending on the agreed number of lines that can be added), so the guesser needs to make some good guesses with their next choices.

There is a strategy for playing hangman (isn’t there always?). A simple way of looking at this is to look at the most frequent letters in the language. Certain letters are used more often than others. (This is different for every language, so you would need to check the frequencies if you intend to play in a language other than English.) In English, some of the most frequently used letters are E, T, A and O but all the vowels are also the most useful ones to try for, along with S and N. The guesser should try those letters first. Often, you will get enough letters that you can guess the word.

If you are the one setting the word, then your best strategy is to use words with low frequency letters. These would include Z, Q J and X. and also to use short words. Combining these two, buzz, jinx, fizzy and joker are all difficult words to guess in hangman.

All of the above is wrong if you are REALLY determined to win at Hangman and willing to check out a few rules and explanations. Try this site for real strategy for winning at Hangman.

This game is also known as exee, ozees, because it uses only the letters X and O. Again, this is a two player game and was originally a pencil and paper game. It is played on a 9 space grid. One player is X and the other is O. The players take it in turn to place their symbol on the grid. The object of the game is to get 3 of your symbol in a row, whether vertically, horizontally or diagonally. It is your opponent’s objective to block you from getting your 3 symbols in a row, while simultaneously getting their own 3 symbols in a row. 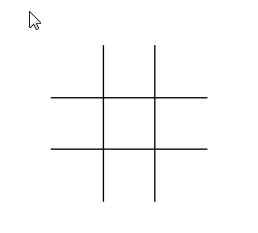 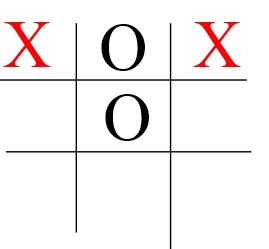 In the game shown, both players have had two turns, with X due to move next. X has only one choice, to place their symbol in the bottom row, middle cell, to block the O symbol from getting 3 in a row. If X chooses any other cell in which to play, they will lose the game as soon as O has their next turn.

The winner of the game goes first the next game. The person who goes first in a game of tic tac toe has an advantage.

There are several levels of strategy for playing Tic Tac Toe. The easiest strategy is to place your symbol in corner cells. If you can manage to get 3 corner cells with your symbol, then you may have 2 or more opportunities to get 3 of your symbols in a row and that means your opponent cannot beat you, whichever cell they place their symbol in. If you want a few more strategies for winning at TicTac Toe, you can find them here.