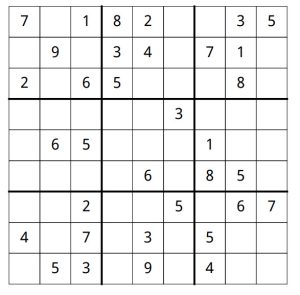 Sudoku is a logic-based game in which symbols are placed in a grid, following 3 basic rules. While the numbers 1 through 9 are the symbols most often used, this is for convenience. No maths is involved. The symbols could be anything, for instance, letters or shapes or colors, as long as there are 9 different variations that can be easily distinguished.

The aim is to fill a 9×9 grid with the chosen symbols so that every column, row, and block contains all of the symbols once and once only. There must be no duplicates.

Sudoku puzzles are presented as partially completed grids and the aim is to find the solution. There should always be only one single correct solution for any particular sudoku puzzle.

Variations of Sudoku puzzles have been around since the 19th century, published in French newspapers.

While 9 X 9 grids, with 81 cells, using symbols such as the numbers 1 to 9 are the most common form of Sudoku puzzles, it is also possible to play with 4 X 4 and 6 X 6 grids and also larger grids. There are also various kinds of different shaped grid puzzles. This site will concentrate on the basic 4 X 4, 6 X 6 and 9 X 9 grids.